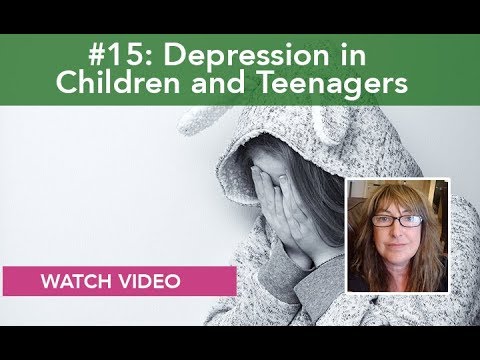 “Depression is a mood disorder that causes a persistent feeling of sadness and loss of interest. Also called major depressive disorder or clinical depression, it affects how you feel, think and behave and can lead to a variety of emotional and physical problems. You may have trouble doing normal day-to-day activities, and sometimes you may feel as if life isn’t worth living” (Mayo Clinic 2019).

Depression isn’t a weakness, or feeling blue, and you can’t simply “snap out” of it. Depression is serious and can have far reaching effects on the functioning and development of children/teenagers and place them at an increased risk of interpersonal and psychosocial difficulties, self harm behaviour, other mental illnesses (anxiety disorder, behaviour disorder), substance abuse and suicidal behaviour. Depression usually requires long-term treatment and supports. However, the good news is that with early identification and intervention, 70 to 90 percent of children/teenagers will experience significant reduction in symptoms, and 45 to 60 percent will have a complete recovery.

It is estimated that up to 2.5 percent of children and up to 8.3 percent of teenagers in the USA have depression. Every year, up to 80 percent of children/teenagers with depression are hospitalized at a cost of $247 million. In Canada, approximately 5 percent of males and 12 percent of females age 12 to 19 yrs. have major depressive disorder. It is estimated the total number of Canadian teenagers age 12 to 19 yrs. at risk for developing depression is 3.2 million. Globally, major depressive disorder in children/teenagers has increased significantly. Sadly, with the increase in depression, the number of children and teenagers ending their lives by suicide has also increased dramatically, with suicide now being the second leading cause of death in kids ages 5 to 24 years.

See the risk factors, symptoms and much more here:
s

Other Mental Health Videos in this Series:

#13: Suicide Prevention: What you need to know to help your children and teenagers
E

#12: Attachment Disorders in Children and Teenagers
/>
#11: How To Help A Child/Teenager With A Mental Disorder Transition Back To School
Y